Our first prenatal appointment was on Thursday, August 26 at 10:30 a.m., the day before we were throwing a shower for friends of ours having twins girls. We were excited and nervous at the same time. My doc, Dr. Margaret Hall at Lakeside Women’s Center in Oklahoma City has been my doctor for almost ten years. I was so excited to talk to her about this new beginning in our lives. Bryan had off work and so did I so we were going to just take the day to enjoying the appointment and celebrate together.

We did the typical meet and greet with Dr. Hall. The, “Congrats, looks like your due date should be around April 20.” She suggested that the ultrasound location may have an appointment available and we should try and get in that same day. My heart raced because this was becoming real very quickly. We were going to get to see the baby. She also told us that because I was barely 7 weeks that is may be difficult to see a heartbeat and not to worry.

So, got an appointment at noon that day with ultrasound. Bryan and I sat nervously awaiting the technicians. I already was thinking that maybe it would be too soon to tell, little did I know what was in store.

The first technician did the ultrasound and then brought in the other gal to assist. Of course, at this point, I thought that was pretty routine. One gal asked, “Have you guys been trying for a while?” I said, “Not too long, six months or so.” Then the technicians both looked at each other and sort of smirked a smile. I was very suspicious at this point.

The tech said, “Ok, I am going to turn on the screen and let you see what we see.” Bryan griped my hand as the screen turned out. It was the biggest anticipation of our lives to date. It was almost like waiting to walk down the aisle and how long that feels until you make to the front the alter. Instead of my fun dress, it was just an ugly gown with jelly on my belly. Not as romantic.

Bryan and I are looking at the screen and then looking at each other. The technician said, “I was trying to ask you how long you had been trying to indicate whether or not you had been using fertility treatments.” I told her we had not. Then she was even more shocked. I said, “Are you telling me that we have natural triplets?” She introduced the term Spontaneous Multiples to us for the first, meaning they are natural. Spontaneous was an understatement.

I had emotions just pouring over me. My eyes filled up and I just could not stop crying. I believe at that moment I felt shock, true disbelief for the first time in my life. My legs were shaking and my husband was standing proud and strong and smiling from ear to ear. He looked at me and said, “Are you happy, what’s wrong?” All I could say was, “I am just scared.” The technicians comforted me, until our journey that day began…Which I thought it already started, but I was wrong.

Picture below is the Coy triplets at almost 7 weeks. 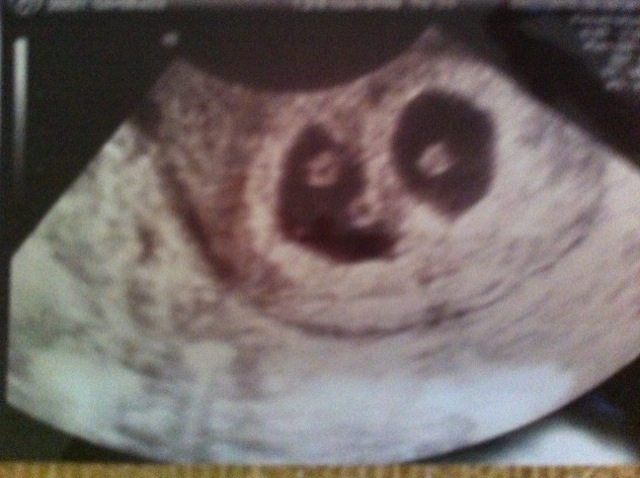 Published by Life in the Coy Pond

View all posts by Life in the Coy Pond